www.diversdock.com contains affiliate links. As an Amazon Associate I may earn a small commission from Amazon (at no additional cost to you) if you click through and make a purchase. Refer to our Privacy Policy

If you’re new to diving, one of the first things you wonder may be how far can a scuba diver dive safely.  According to the Professional Association of Diving Instructors, the average depth for recreational scuba divers is as deep as 130 feet (40 meters).  Experienced divers sometimes work to push these limits to set new records and test themselves and their gear. Less experienced divers should be aware of their limits and stay within them for their own safety.

The biggest issue with deep-water diving is pressure. Humans are not built to survive under the immense pressure of deep water. Your scuba gear helps to mitigate some of these risks, but it can’t protect you indefinitely.

Every diver has a no-decompression limit (NDL), which is a time limit for how long the diver can stay at a particular depth. If you stay past the NDL, you will not be able to rise to the surface quickly without suffering from decompression sickness. Therefore, choosing a diving depth becomes a matter of balancing your oxygen reserves with your NDL. In general, deeper dives mean you will have less time exploring at that depth.

How far can you scuba dive before reaching your limit? That depends on your fitness level, amount of training, breathing gas mixture and previous dives. If you’ve recently completed a deep dive, you will not be able to go as deep again within a six-hour time period due to the buildup of nitrogen in your body. 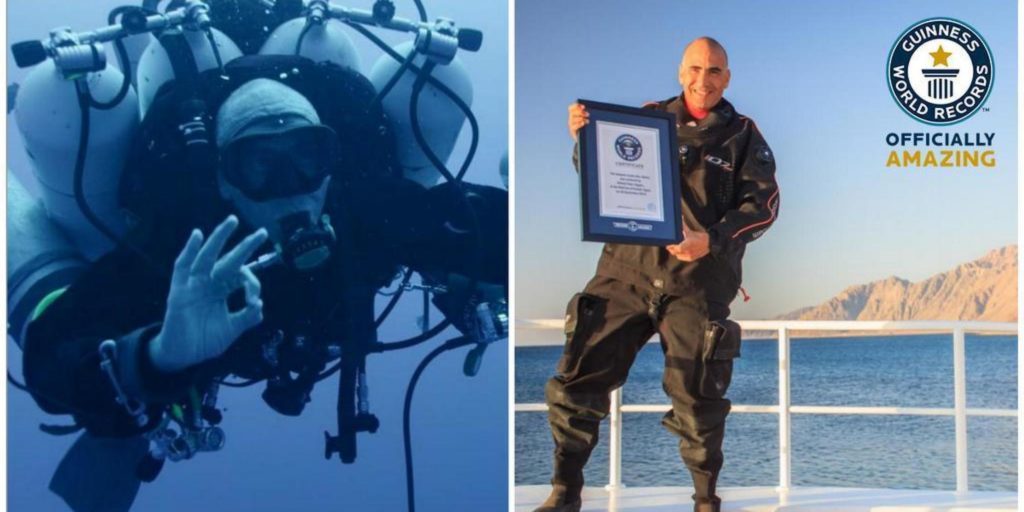 How far can you scuba dive? That depends on your level of experience. Early training dives may go as deep as 40 feet. With open water certification or during open water training, you may dive up to 60 feet. Depths of 130 feet and beyond are usually reserved for more experienced and certified divers.

Read our post about the best scuba dive watches with depth gauge here!

The world record for scuba diving is held by Ahmed Gabr, an experienced Egyptian diver.

These depths are extremely unusual. Most recreational divers go to a depth of 130 feet, which stays below the NDL and allows for safe diving.

Experienced divers can go beyond the NDL. How far can a scuba diver dive beyond the no-decompression limit? That depends on how much oxygen they have available and how long they can stay underwater. For example, Ahmed Gabr’s record-setting dive took just 12 minutes to reach the depth but 15 hours to return to the surface. This is because diving beyond the NDL requires the diver to stop frequently on the journey to the surface in order to acclimatize to the decreasing levels of pressure. Without careful planning and adequate oxygen, attempting to dive beyond the NDL can be deadly.

In 2015, Dr. Guy Garman, known as ‘Doc Deep’ attempted a world record deep dive of 1200-feet (366-metres). A group of support divers were waiting at the first stop at 110-metres, scheduled for 38 minutes into the dive. Dr. Garman never arrived. Four days later his body was located and plans were made to obtain the equipment required to lift the descent line and retrieve his body. The experienced diver had been training for the dive, made in St Croix in the US Virgin Islands, for two years.

Two weeks previous to Dr. Garman’s attempted record, Natalia Molchanova, the world’s greatest freediver, vanished as she  was freediving – diving without breathing apparatus – near Formentera, a small island south of Ibiza. She never re-emerged and her body has never been found. 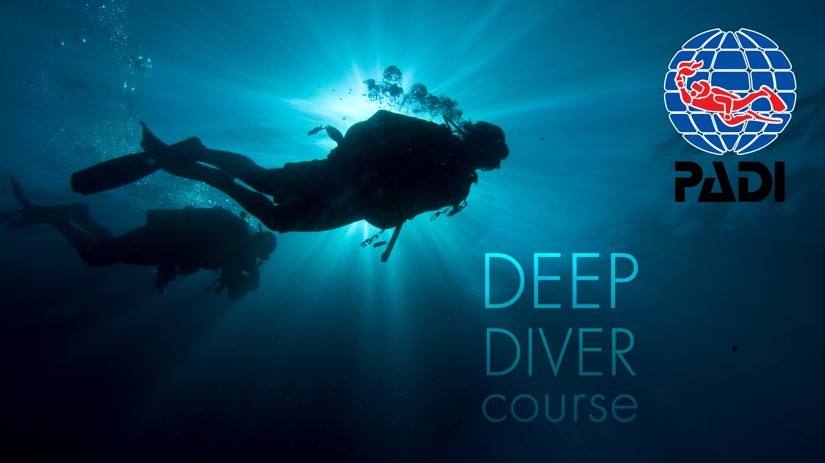 PADI specialty Deep Diver course: Why not learn to explore deeper dive sites with confidence at depths down to 40 metres/130 ft.? Learn to manage your gas supply, go over buddy contact procedures, and buoyancy control.

How to use a Rotating Bezel

Best Springs to Dive in Florida

How to prevent the bends

www.diversdock.com contains affiliate links. As an Amazon Associate I may earn a small commission from Amazon (at no additional cost to you) if you click through and make a purchase. To learn more, please refer to our Privacy Policy